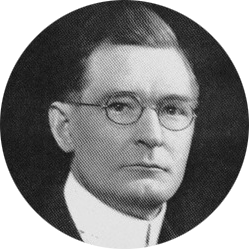 The future is just a repetition of the past...

W.D. Gann was born on a farm some seven miles outside of Lufkin, Texas, on June 6, 1878.  He was the firstborn of ten children, two girls and eight boys.  Gann never graduated from grammar school or attended high school, leaving school in grade 3.  As the eldest boy, life on the farm began his dedication to hard work.  At an early age, his interest in commodities and business were prompted as he toiled on his family’s property and overheard the conversations of businessmen as he worked as a cigar and newspaper vendor on the railway.  He knew then he desired to be on the other side of the market.  He wanted to buy, sell, and win, not produce.  His first interaction in the market was when he worked in a brokerage firm in Texarkana, Texas, as he attended business school at night.

Married with two young daughters, he made the move to New York City in 1908.  He then divorced his Texan wife and remarried, having two more children, another daughter and his only son, John.  It was in the big city that he made his first successful trade in commodities and started studying mathematical principles to determine the future trend.  In 1907, he predicted the panic in stocks and the decline in commodities.  On August 8, 1908, he made his most prolific mathematical discovery for predicting the trend of stocks and commodities.  These were his theories on time cycles and geometric angles.  At that point, he started trading with $300 of capital and made $25,000.  He started another account with $130 and made $12,000 in thirty days.

In 1909, the public began taking notice of Gann’s techniques and the Ticker Magazine printed an article entitled, “The Remarkable Predictions and Trading Record of W.D. Gann.”.  An interesting excerpt from the article written by the late R.D. Wyckoff, the owner and editor of the magazine, reads as follows:

One of the most astonishing calculations made by Mr. Gann was during last summer (1909) when he predicted that September wheat would sell at $1.20.  This meant that it must touch that figure before the end of the month of September.  At twelve o’clock, Chicago time, on September 30th (the last day), the option was selling below $1.08 and it looked as though his prediction would not be fulfilled.  Mr. Gann said, “If it does not touch $1.20 by the close of the market it will prove that there is something wrong with my whole method of calculation.  I do not care what the price is now, it must go there.”  It is common history that September wheat surprised the whole country by selling at $1.20 and no higher in the very last hour of the trading session.

This was a satisfying prediction for Gann and he continued to profit from his exceptional methods for the remainder of his life.  In 1914, he foretold the World War and the panic in stocks.  In 1918, Gann issued a prediction indicating the end of the war and the Kaiser’s abdication.  Again, this prediction came to fruition.  His claims were commented on and supported by the Houston Post, the New York Herald, and many other leading newspapers.

Gann wrote his first book, Truth of the Stock Tape, in 1923.  He received rave reviews from the Wall Street Journal and The Financial Times of London, and it is still regarded as one of the best books ever written on the stock market.  That same year, Gann foretold a crop failure and a big advance in cotton.  Cotton prices advanced 17 cents per pound between August and November 30, 1923.

In 1927, at age 49, Gann produced his most unusual book, The Tunnel Through the Air.  This is a fiction novel encoded with predictions that can be deciphered by those with intelligence and persistence.  Some writers from ancient history wrote in code so that the masses could not easily interpret the underlying information to use it for evil gains or destruction; however the writings remain in history forever and to this day, somewhat of a mystery.

One of his most incredible predictions took place in 1928 when Gann predicted the end of the great bull market in stocks for September 3, 1929, and the greatest panic to follow.  In 1930, he wrote his next book, Wall Street Stock Selector, which depicted the subsequent stock market declines in 1931 and 1932.  In his book, Gann warned investors of a “massive panic too strong for buying power to withstand”.  In April 1930, when the book was written, the Dow Jones 30 Industrial Averages were selling at 297, and on July 8, 1932, they declined to 40½.

Below we have an outline of Gann’s trading record for the years 1933 to 1935.  The following trades exemplify his uncanny success:

As you can see, his three-year record was astounding and he sustained success throughout his lifetime.  In 1936, he wrote New Stock Trend Detector that focussed on a 10-year trading record in Chrysler Motors, according to his set of rules.  In July of that year, he purchased an all-metal airplane to make crop surveys, maintaining his reputation as a revolutionary forecaster.

In 1937, he published his next book, How to Make Profits Trading in Puts and Calls, in which he was able to project a bear year with sharp declines occurring in March and September.  He called for a maximum decline of 80 points and the low was in November at 82-and-a-fraction points.  In 1939, he predicted the World War and made giant profits buying grains.

He wrote his most famous book, How to Make Profits Trading in Commodities, in 1941.  It has been pronounced as one of the best books ever written on commodities.  Gann continued writing and, in the year 1949, produced 45 Years in Wall Street, covering new rules for stock trading.  He was awarded an Honourable Membership in the International Mark Twain Society.  In 1950, he wrote another unusual book entitled, The Magic Word.  This book refers to many biblical references and in particular, the lost word, Jehovah.  Jehovah, when understood, is a master key to the Law of Vibration.  He was not satisfied there, and on June 6, 1951, his 73rd birthday, he completed writing a new edition of How to Make Profits Trading in Commodities.  Aside from revolutionising market trend through mathematical, geometrical, and astrological proof, Gann revelled in his ability to predict numbers through progression and rotation.  He utilised this skill in the Cuban lottery.  Rumour has it he was so confident in winning that he would fly from his home in Miami to Cuba before winning numbers were actually drawn.  He also enjoyed success at horse racing, to prove his theories worked in all mathematical forms and areas of life.

W.D. Gann was an inspiring man who started life with little education, no money, few prospects, and transformed it into a personal assault on achievement.  Gann was a Freemason and studied the Bible emphatically.  He decoded many of his cycles from the Bible, and you will notice many Biblical references throughout the course.

His determination is a credit to the type of man he was and he let nothing in his life detract from his main objective, to be the best at what he did.  Few today can compete with Gann’s exemplary predictions of market movement, and in my opinion, that is precisely how he would have envisioned it.

He died in 1955 at the age of 77 and is buried with his second wife in Brooklyn, New York, at Green-Wood Cemetery. The site is located in a position that looks towards Wall Street, a fitting place of rest for a man who never took his eye off the market.